Controlled and Prohibited Goods for Export

Controlled and Prohibited Goods for Transhipment

Application for Customs Ruling on Valuation

Permits, Documentation and Other Fees

Application for Customs Ruling on Classification of Goods

Application for Customs Ruling on Origin Determination of Goods

Regulation of Imports and Exports Act

The Import Certificate and Delivery Verification (ICDV) complement the export control regime of the foreign exporting country/region. Import Certificate serves as an assurance that the Singapore authority has no objection to the proposed import of the specific goods to Singapore for the stated end-use and to the stated end-user. Delivery Verification serves as an assurance that the goods have imported into Singapore.

The ICDV is a 3-stage process: 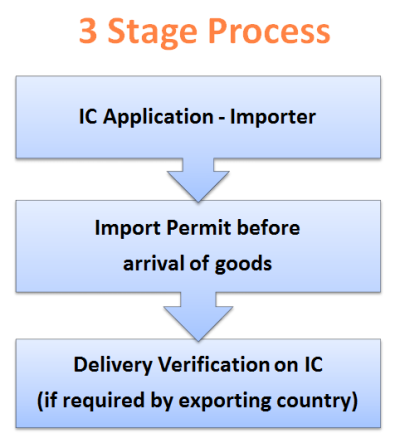